With the arrival of our new range of Barber Poles we decided to take a look into the history of Barber Poles and how they became a household feature of barbershops across the world.

The history is more gruesome than you might expect – with the colours originating from the long-gone practice of bloodletting and older, more barbaric medical procedures. Bloodletting was an old procedure that consisted of cutting open veins in order for blood to drain – a procedure seen as a common cure-all for anything from a sore throat to the plague itself.

Clergymen were well known for performing the operation – but in 1163 Pope Alexander III prohibited them from performing the procedure. As a result Barbers took up the mantle of bloodletting and added the procedure to their repertoire. Adopting the moniker of barber-surgeons they’d also tend to other small ailments and conditions such as pulling teeth and treating non life-threatening wounds. This became a well-established career route for people wishing to deviate from simple hair maintenance into full-fledged healthcare.

The colours, then, are perhaps a little self-explanatory given these facts!

The iconic 3-tone Barber Pole adds the colour blue – the origins of which are still debated. The most obvious origin is in line with the rest of the colour scheme: with blue representing the bulging veins that would be bloodlet. Others argue that the design was made popular in the USA, with blue added into the mix for a more patriotic American aesthetic. Some American states only allow licensed barbers to legally display a pole, such is the significance of a Barber Pole! 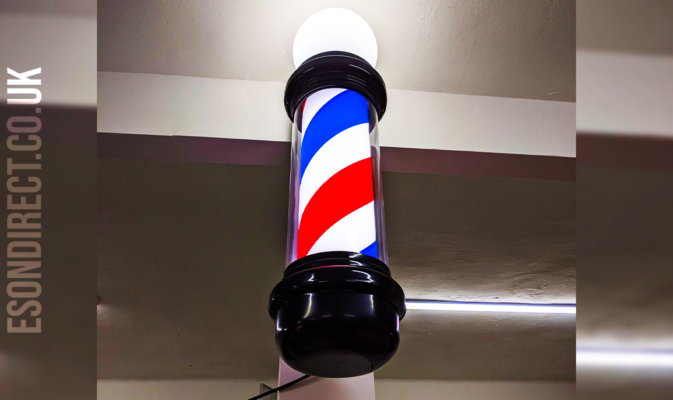 That being said, where does the actual pole itself originate? The bloodletting procedure is as cruel and painful as it sounds – so patients were given a pole to grasp which would help their veins bulge – but also give them something to grip firmly while dealing with the ensuing pain (ouch!). Barbers would hang the towels outside of their establishment to dry, but such is the nature of bloodstains that they’d usually still be painted red & white from the barber’s endeavours. 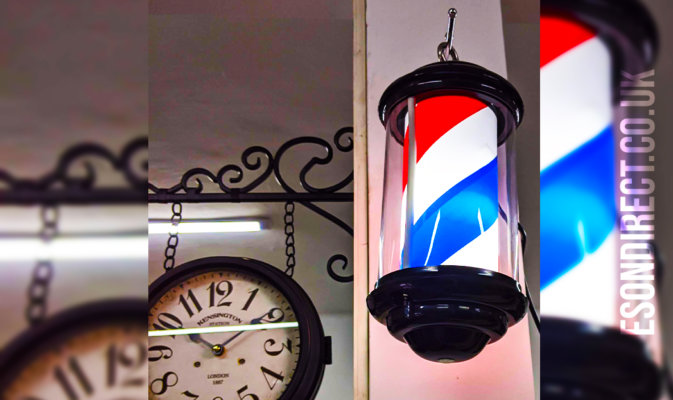 The sight of a pole adorned with a bloodstained white rag twirling in the air is quite clearly a precursor to the rotating barber poles of today. Although now the offerings are far more sanitised and welcoming – just check out our range of Barber Poles!